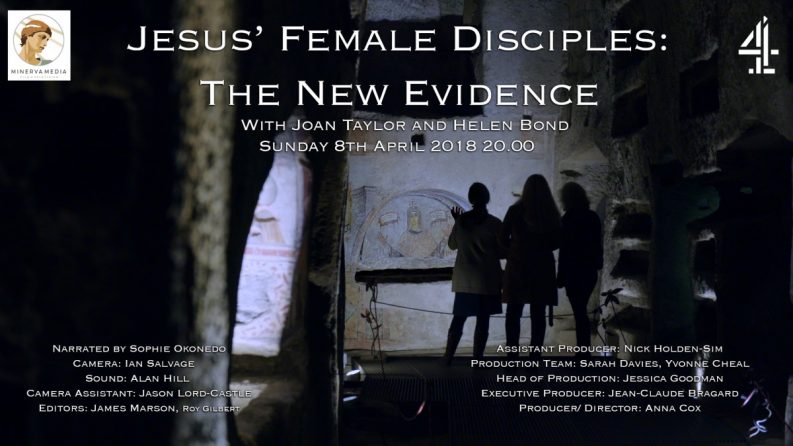 The following resources are provided here for those who want to find out more about the content of this documentary.

For introductions to the historical Jesus, see:

Bond, Helen, The Historical Jesus: A Guide for the Perplexed (London: T&T Clark, 2012).

Fredriksen, Paula, Jesus of Nazareth, King of the Jews: A Jewish Life and the Emergence of Christianity (New York: Vintage Books, 1999).

Wright, N. T., The Challenge of Jesus: Rediscovering who Jesus was and Is (Downers Grove; Illinois: Inter-Varsity Press, 1999)

Female Disciples of Jesus (and their presentation in the Gospels)

Women appear at times in the Gospels, and they are even named, but they can be read as passive and marginal. This is partly because the Gospel writers tend to hide the women among Jesus’ band of disciples for large parts of their narratives. They only appear when they are essential as witnesses, when the male disciples have gone into hiding. For example, in Mark 15:40-41, at Jesus’ crucifixion, it is said: ‘There were also women watching from a distance, among whom were Mary the Magdalene and Mary the mother of James the less and Joset, and Salome: women who when he was in Galilee served him (or: provided for him) and many others who went up with him to Jerusalem.’ We have to then remember they were with Jesus in Galilee when they were not previously noted.

Fehribach, Adeline, The Women in the Life of the Bridegroom: A Feminist Historical-Literary Analysis of the Female Characters in the Fourth Gospel (Collegeville, MN: Liturgical Press, 1998).

The hills of Jerusalem are dotted with cave-tombs. In these tombs archaeologists have discovered hundreds of ossuaries, usually made of stone, in which the bones of the dead were deposited. On many of these there are names. About a quarter of all women named on these were called ‘Mary’, the Hebrew or Aramaic names Maria, Mariam, Mariamene or Mariamme. It is no surprise then that in the New Testament we find that a number of Jesus’ women disciples – and his mother – have the same name. Mary Magdalene, Mary and Martha, Jesus’ mother Mary, Mary the mother of John Mark, and so on.  Women were usually defined by their association with their husbands, fathers or sons. ‘Mary wife of Shimon’, or fathers, ‘Mary daughter of Eleazar’, so not distinctively on their own as a rule. However, they are occasionally given nicknames as a way of distinguishing them in a family group. Very rarely are they identified by their hometown. If they are, this would probably indicate independence of male guardianship.

McCane, Byron R., Roll Back the Stone: Death and Burial in the World of Jesus (Harrisburg, PA: Trinity, 2003).

In all the Gospels Mary witnesses Jesus’ crucifixion and burial, and she is then the foundational witness (see John 20). Prior to this, she is hidden in the Gospel narratives, as with the other female disciples of Jesus. She does appear with ‘many other’ women on the road with Jesus in Luke 8.2-3, where she is said to have been rid of ‘seven demons’. This most likely indicates she was suffering from illness of some kind, since Jesus is shown to heal people by ‘casting out demons’ frequently in the Gospel narratives. She is not to be confused with the unnamed repentant woman who wipes Jesus’ feet with her hair in Luke 7:36-50. This woman was conflated with Mary in Western (Catholic) tradition, as evidenced by sermons given by Pope Gregory in 591, but in Eastern (Orthodox) tradition she is remembered as Jesus’ foremost female disciple without any association with the unnamed woman.

Mary’s name ‘the Magdalene’ derives from the Aramaic word magdal, which means ‘tower’. There were many places called ‘the Tower of something’ in the first century, but no one locality just called ‘the Tower’, Magdala, though many places could be dubbed this by locals for short. It is likely Mary came from a place called Magdal Nuniyya, the Tower of Fish, a fishing village on the shores of the Sea of Galilee, identified in the earliest literature just north of the city of Tiberias. Later on, in the 5th-6th centuries, Christians identified another nearby locality – probably the ruins of Tarichaea – as Magdala and developed it as a pilgrimage site, with its name continuing until today. The question is whether calling Mary ‘the Magdalene’ (Aramaic: Magdalaitha) is a kind of nickname indicating both her independence and also her status: it means, literally, ‘the toweress’, or the ‘tower-woman’.

de Boer, Esther A. The Gospel of Mary: Beyond a Gnostic and a Biblical Mary Magdalene (JSNTS 60; London and New York: T&T Clark, 2004).

Unlike Mary Magdalene Joanna has not elicited the same attention, probably because she is only explicitly mentioned in Luke 8:2-3. Here she is called ‘Joanna the wife of Chuza, Herod’s steward’ who was one of many women on the road with Jesus who ‘served (or provided for) him from their resources’. This raises many questions about how a woman associated with the Galilean ruler Herod Antipas’ court (the Greek word for a ‘steward’, epitropos, indicates an important administrator) could end up with other women on the road with Jesus, ‘providing for’ or ‘serving’ him. The word used here diakoneo, is one often associated with specifically Christian ministry, from which we get the term ‘deacons’, Greek diakonoi, and implies activity and engagement. The resources mentioned implies the women had independence enough to use their own possessions for the good of the movement. It is indicated in the passage that, like Mary Magdalene, other women disciples were especially motivated to accompany Jesus on the road, despite its many dangers and discomforts, after being healed. This is clearly a Lucan expansion of Mark 15:40-41) but there is no reason to suppose it does not contain additional authentic memories.

The elegant theatre of Tiberias, built by Herod Antipas, provides a fitting location for considering her role in the Jesus movement.

Also mentioned in Luke 8:2-3 as one of the female disciples on the road serving or providing for Jesus is Susannah. We know nothing about her.

Salome and the Salome Cave

Mark 15:40 mentions Salome without any further information, as if readers would know who she was. She was one of the women who witnessed the empty tomb (16:1). Mary Magdalene and Salome appear together as foremost female disciples of Jesus in literature of the 2nd-3rd century (e.g. the Gospel of Thomas and the Gospel of the Egyptians, through to the 4th-century Questions of Bartholomew) but in the Protevangelium of James, another 2nd-3rd century text, Salome is associated not with Mary Magdalene but with Mary the Mother of Jesus, when she doubts the testimony of Mary’s midwife (while in the later 7th-8th century Gospel of Ps. Matthew Salome is even identified as a midwife). In the tradition of another late text, The History of Joseph the Carpenter, she accompanies the holy family to Egypt. In mainstream tradition she was blended with Mary the wife of Cleopas and the mother of the sons of Zebedee.

Salome seems to have been reconfigured in different ways in Christian memory, and she never made it to the status of a saint in mainstream tradition. However, in 1982 a mysterious cave came to light in excavations near ancient Maresha. This cave was covered in graffiti in Greek, Syriac and Arabic testifying to a long veneration of a ‘holy/Saint Salome’, not recorded anywhere else. The excavators associated the Salome of the cave with the late textual evidence of Mother Mary’s midwife companion, but she is here prayed to as a healer. This recalls the fact that the early apostles (envoys) of Jesus among his disciples were supposed to spread his message and heal (Mark 6:6-12). It was originally a Jewish burial cave, and its adaptation probably took place no earlier than the 3rd century, with continued use through to at least the 7th century, though the dating remains unclear.

Mary and Martha appear in both the Gospel of Luke and in the Gospel of John as key female disciples of Jesus. In Luke 10:38-42 Mary’s role as a disciple who prioritises listens to his teaching, prior to ‘service’, is strongly validated. In John they are defined as the sisters of Lazarus who recognise Jesus as Christ (John 11), and address him as their teacher. They appear to have a house in Bethany where Jesus stays, and Mary is identified as anointing him (John 12:1-4). The memory of their important role is preserved in the earliest Christian art of sarcophagi (see below), and in a cave outside Jerusalem, a 4th-century pilgrimage site that was remembered as being part of their home.

Reinhartz, Adele, ‘From Narrative to History: The Resurrection of Mary and Martha,’ “Women Like This’ New Perspectives on Jewish Women in the Greco-Roman World, ed. Amy-Jill Levine (Atlanta: Scholars Press, 1991).

The Legacy of the Female Disciples

In the early churches there was enormous diversity, and female leaders are found in most traditions (among the Marcionites, Carpocratians, Gnostics and Montanists, for example). Their claims to authority could not have sprung from nowhere, and the evidence of important women disciples of Jesus and their role as (at the very least) witnesses to the resurrection suggests that they functioned as role models for centuries. In the mainstream tradition, the question of women bishops and presbyters is much debated on the basis of both New Testament and early Christian texts. One of the problems is that surviving literature has been selected in a way that promotes a type of Christianity that triumphed in the 4th century under the auspices of the Roman emperor Constantine, a military leader who adopted Christianity with a view to conquering land and defeating his enemies, given that one branch of the faith had become increasingly popular with his soldiers. Despite the dominant discourse that would marginalise women at this time, fragments of texts, inscriptions, art and archaeology can enable us to catch a glimpse of women still exercising leadership roles, on the basis of the precedents they knew, through to the 6th-7th centuries.