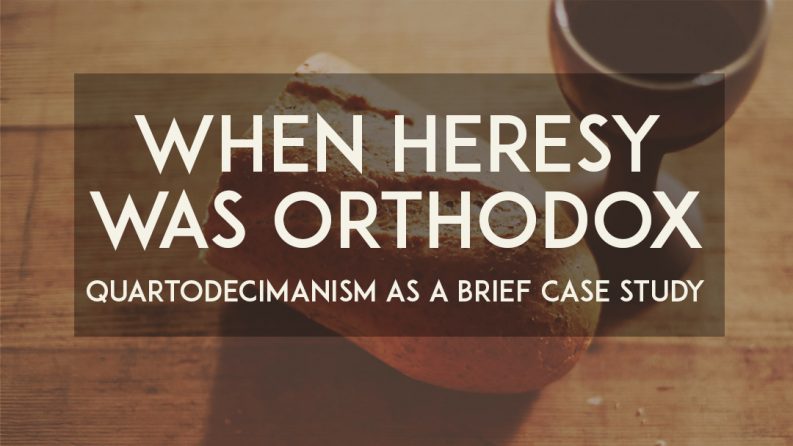 When Heresy was Orthodox: Quartodecimanism as a Brief Case Study

Many people are celebrating Easter all over the world this time of year, some within a Christian context and others a more secular one. Many people receive Communion on Easter Sunday in remembrance of Jesus’ Last Supper as they do on numerous other occasions throughout the year. Yet, Jesus’ Last Supper took place prior to his crucifixion, burial, and resurrection, not on a Sunday morning. There is a debate reflected recently in blogs,1 articles,2 and books3 about whether Jesus’ last meal with his disciples was in fact a Passover meal, a modified Passover celebration, or something else.

There has been a renewed interest within many modern Christian communities of celebrating Communion not only as a meal (i.e., the Lord’s ‘Supper’), but more specifically as a Passover meal (Pesach)4 beginning the Feast of Unleavened Bread (cf. Ex 12; Lev 23.5–8). This can be seen most notably within contemporary Jewish or Hebrew style Christian communities, such as at Messianic congregations or ‘Torah-observant’ churches. Celebrants hold to differing opinions about how to observe this meal or feast. Some are more open to including Jewish customs which developed later than the time of Jesus (e.g., a seder)5 and others attempt to reconstruct what they perceive would have been a similar first century CE Passover meal, though omitting a sacrificial ceremony of the Pesach (hopefully!).

In any case, this current ambition to celebrate the Passover meal is actually nothing new within Christianity. Some of the earliest Christians, the Quartodecimans, were already celebrating the Lord’s Supper at Passover before it was ‘cool’. A Quartodeciman, from Quartodecimani (‘fourteenther’),6 is someone in early Christianity who celebrated the Lord’s Supper or Pascha on the evening of the 14th of Nisan/Aviv (the first Jewish month) at Passover. This does not mean that they only celebrated the Eucharist annually at this time, but that they observed Pascha on Passover rather than on Sunday as was the practice of many other Christians. Quartodecimans defended their Passover tradition against internecine efforts to eradicate it for at least a few hundred years beginning with the inception of Christianity.

It is uncertain whether Jewish Christian sects such as the Ebionites or Elcesaites could also be deemed Quartodecimans, but they probably observed the Passover in addition to other Jewish festivals, in connection with Jesus.7 Quartodecimanism was popular amongst Christians of the proto-Orthodox or catholic (lowercase ‘c’) churches in Asia Minor. The rationale for celebrating Passover on the 14th of Nisan/Aviv was simple: 1) Jesus observed a Passover celebration with his disciples before his crucifixion; 2) Jewish Christians have already continued to incorporate Jesus into their daily Jewish lives, which included legal observances and customs; 3) when Passover is celebrated, it is to be celebrated in remembrance of Jesus and his Last Passover. Eventually, however, the Quartodecimans’ tradition would lead to a controversy and be deemed heterodoxical.

The Quartodecimans were Passed Over

In Eusebius’ Historia ecclesiastica (HE) 5.23–25, he details some of the events and correspondence during the Quartodeciman controversy (cf. Socrates Scholasticus, HE  5.22; Sozomenus, HE 7.18–19).8 According to Eusebius, synods were held in Palestine (presided by Theophilus, bishop of Caesarea, and Narcissus, bishop of Jerusalem), Rome, Pontus (presided by Palmas), Gaul (where Irenaeus was bishop), Osrhoene, and around Corinth (where Bacchyllus is bishop). There was agreement against the Quartodecimans that Easter (a later term for Pascha) was to be celebrated on Sunday, the Lord’s Day, concluding the Paschal fast (HE 5.23).

Despite pressures from Rome, Polycrates of Ephesus (130–196 CE) defended the celebration of Pascha on Passover. He claimed to Victor in Rome that it was the older apostolic tradition, dated back to the apostle Philip along with his daughters, the apostle John, Polycarp of Smyrna, Thraseas of Eumenaea, Sagaris who was buried in Laodicaea, Papirius, and Melito of Sardis. Polycrates also claimed he had support from many other bishops in Asia Minor, including the seven bishops of his own family (Eusebius, HE 5.24; cf. Sozomenus, HE 7.19).

The Quartodecimans were apparently still fighting for their practice into the fourth century CE in Constantinople (cf. passing references in Socrates Scholasticus, HE 6.11, 7.29). The influence of Jewish customs is seen again in the dispute over whether or not to set Easter according to the Jewish calendar, which led to another topic on the agenda at the First Ecumenical Council at Nicaea in 325 CE. This issue was not over the Quartodeciman controversy, but evidences how Christian practices like the celebration of the Paschal feast were being wrestled away from Jewish customs or origins still in the fourth century CE. English Christians were also setting Easter according to a different manner than Rome still in the 8th century CE and were accused of observing the feast according to the Hebrew custom (Bede, Historia ecclesiastica gentis Anglorum 2.2, 2.19, 3.4, 3.25).9

Ultimately, Victor in Rome passed over the Quartodeciman view and deemed it heterodoxical. He swiftly sought to excommunicate the Christians in Asia Minor, but Irenaeus of Gaul urged him ‘not to excommunicate whole churches of God for following a tradition of ancient custom’ (Eusebius, HE 5.24). Irenaeus explained that even before their time the churches and bishops observed different ancient traditions in peace despite differences of opinion, including the bishops of Rome even when Polycarp visited and the matter was discussed (Eusebius, HE 5.24). Despite this, Eusebius adds that the Palestinian bishops and others with them were in agreement that the tradition of the Sunday observance is the correct view as passed on by apostolic tradition (HE 5.25).

But is there possible evidence to the contrary in the New Testament? Could Paul and at least some of his churches have been ‘Quartodecimans’?

Was Paul a ‘Quartodeciman’?

The apostle Paul probably kept the Passover once a year in remembrance of Jesus. Paul and the churches he established may have observed this feast according to the popular Jewish lunar calendar, with some modification as symbolism relating to Jesus was incorporated.10 Paul likely wrote 1 Corinthians around the time of Passover, in the late Winter or early Spring as the festival was approaching.11 Evidence of this dating is seen in many allusions to Passover/the Feast of Unleavened Bread in Paul’s epistle (1 Cor 5.6–8; 10.14–22, 11.17–34). I take Paul’s hortative injunction in 5.8a, ‘let us keep the feast,’ to be more than mere symbolism or speaking of the Christian life, though I understand his following uses of leavened and unleavened bread to be illustrative of moral conduct (5.8b).12 Paul recounts the tradition of Jesus’ Last Supper in his Corinthian correspondence (1 Cor 11.23–26). He exhorts the Corinthians asserting, ‘For as often as you eat this bread and you drink the cup, you proclaim the death of the Lord until he comes’ (ὁσάκις γὰρ ἐὰν ἐσθίητε τὸν ἄρτον τοῦτον καὶ τὸ ποτήριον πίνητε, τὸν θάνατον τοῦ κυρίου καταγγέλλετε ἄχρι οὗ ἔλθῃ, v. 26). When Paul says ‘as often as’ (ὁσάκις… ἐὰν) he probably does not mean whenever the Corinthians decide to celebrate the Lord’s Supper (e.g., once a week), but as often as the Corinthians celebrate the Passover. There may be significance to Paul’s use of the demonstrative ‘this’ (τοῦτον) here. It is not just any bread prepared on a weekly basis for a celebratory or communal meal (which may have been taking place amongst Christians), but it is the unleavened bread of Passover. It is ‘this’ bread to which Paul was just referring in his quotation of Jesus (v. 24). The same goes for the cup (cf. vv. 24, 27–29). Passover was approaching and Paul wanted to ensure that the Corinthians would be prepared to observe the feast without sin or discord. If Paul and the Corinthians were observing the Passover in some form, they were in good company with many others of the earliest Christians who kept the feast annually in remembrance of Jesus and his Last Passover Supper.

It should be noted that the agreed decisions in the synods mentioned by Eusebius included the bishops of Jerusalem and Corinth (HE 5.23). Despite my inklings about Paul and the earliest Corinthian Christians keeping Passover in remembrance of Jesus, the inclusion of Corinth in the agreement against the Quartodecimans may imply that the acceptable practice in or around this region at a later time was not to celebrate the Passover according to the Quartodeciman manner. This, however, is not too surprising considering the rapid unification of Christian churches, the growing number of Gentiles in Christianity, and the elder-ruling structure and hierarchy-developments that took place already during the last half of the first century CE. The practices or opinions of the bishops and Christians of which Eusebius speaks may have differed from original customs in the churches of Jerusalem and Corinth. The church in Rome was also already gaining a sway over ecclesiastical matters or disputes. Various practices and customs observed in the earliest established churches (apostolic and Pauline) quickly came under the scrutiny of those in decision-making power and ecumenism. Most or perhaps even all of the Christians in Corinth were Gentiles, and so even if they had learned to observe a form of Passover or other Jewish holidays from Paul (cf. Pentecost in 1 Cor 16.8), their customs would have rapidly changed after Paul’s death, the destruction of the Temple in 70 CE (a devastating blow to many Jewish practices), and the increasing unification of and regulation by other churches. The same was likely the case even for the churches in Jerusalem and Palestine. Although the Quartodeciman Passover practice may have been snubbed out in places like Corinth and Jerusalem where it was probably originally observed without much question, it apparently continued amongst other Christians in Asia Minor for some time (e.g., Polycrates of Ephesus and his following).

The Short-lived Orthodoxy of Quartodecimanism

Before Quartodecimanism drew enough attention to be officially deemed heterodoxical, it seems to have enjoyed a time of relative peace and substantiation amongst its adherents. After all, it was only a logical understanding of their Scriptures and was a clear apostolic tradition for its celebrants. Despite disagreement in Rome, it was apparently tolerated as differences of opinion on this practice were not seen to be anything too serious. At least for some period of time Quartodecimanism was not a ‘heresy’, but was a practice of many ‘Orthodox’.

At least for some time during the origins of Christianity, Quartodecimanism or the celebration of the Lord’s Supper annually as a Passover-type meal on the 14th of Nisan/Aviv may have been considered a ‘correct’ or ‘orthodox’ practice amongst many Christians throughout Palestine and Asia Minor. Could it be that some of the apostles such as John and Paul themselves observed and passed on this tradition? 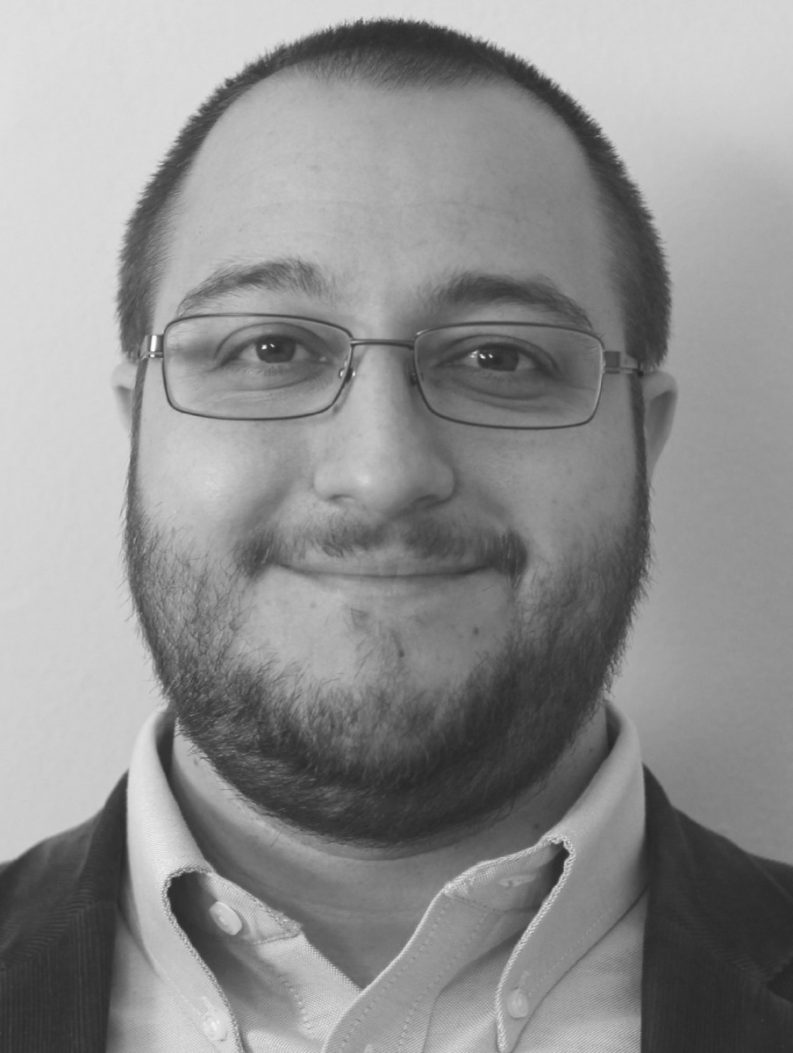